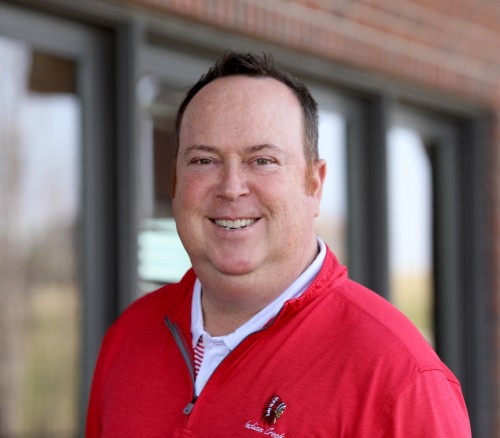 James T. Rolls, Director of Golf, Class A PGA Member, has 23 years of experience in golf operations. He comes to us from a multi-course facility with 72 championship holes designed by Robert Trent Jones, Sr. and Jack Nicklaus.  He joined the Indian Creek management team as the Director of Golf, in May of 2011. James and The Club at Indian Creek were recently awarded Merchandiser of the Year for 2018, Nebraska Section of the PGA, Public Award, this marks the third time (2013 & 2016) that James and Indian Creek have won that award!

Following a brief career as a professional golfer James accepted a position as an Assistant Golf Professional with the Horseshoe Bay Resort in early 1997. By the end of 1998 he was promoted to the Head Professionals position with the resort at their Slick Rock facility. By the summer of 2000 he again was elevated to the multi-course facility known as Cap Rock, the host facility for the award winning golf courses, Ram Rock and Apple Rock.

James was born and raised in upstate New York and moved to Texas in 1982. He attended Round Rock High School in Round Rock, Texas. He then spent two years competing at the Jr. College level in Temple, Texas at Temple Jr. College, before earning a full scholarship to play NCAA Division I college golf at Southwest Texas State University where he successfully obtained his Bachelor of Science in Recreation Administration. James, currently serves on the Board of Girls Golf of Omaha Association and is also the lead instructor. During his time in Texas, James was a member of the Dallas Morning News voting Panel the panel that was responsible for the annual golf course rankings in the state of Texas.

Currently, he and his wife Liza are getting to know Omaha and the great state of Nebraska, feel free to stop on by and introduce yourself to James or the staff! We look forward to seeing y’all and truly appreciate your business!